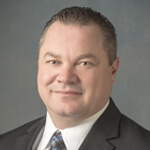 As Vice President, it is Jason’s responsibility to help ensure each project that Northstar Fire Protection of Texas (Northstar) initiates results in a positive outcome that adds value to the organization.

Jason develops, implements, communicates, and assesses policies around employee training that are focused on keeping the team at Northstar equipped to tackle the most advanced technological challenges found in today’s fire protection industry. In all of his work, he strives to deliver projects on time and on budget – resulting in the majority of the company’s work being negotiated.

Jason has over 25 years of experience in the industry and has been with Northstar since 1988. In his time with the company, he has earned roles of increasing responsibilities at the Austin office and throughout the organization, including Designer, Project Manager, Estimator, Operations Manager, Branch Manager, and most recently Vice President.

Jason has a wide range of experience working on key projects with Northstar for some of the companies most important clients, including the Samsung Microchip Plant in Austin, TX; the Hospital Corporation of America’s Data Center in Nashville, TN; and a United Services Automobile Association (USAA) expansion in San Antonio; TX.

Jason and his wife have two children who actively participate in a wide variety of athletic and academic endeavors, all of which Jason and his family are deeply involved in.